When I left off Elite iClasss hacking, the method of hacking iClass Elite was left a bit unfinished. Recently, another forum member reached out to me, gracefully lent me an elite-capable reader, an elite tag and a few standard tags, in order for me to be able to finish the work started. While key-extraction from the reader worked fine, actually dumping elite tags did not function properly. It turned out that part of the cipher implementation was wrong (technically, the hash1 implementation).

After that was fixed, I incorporated loclass into pm3 proper, and fixed up the dumper to be more stable. So, here’s how perform the reader-attack in two steps; first the OTA-attack, then the bruteforce:

Once that’s finished, you can dump a corresponding elite card:

You’ll notice that some bugs remain; the attack first misses one block, but it works the second time. Also, it reports “0 bytes dumped”, which is a flaw on the client side - nevertheless, the data is there on the screen. The next goal for iclass is to be able to do a full simulation; that is, not only simulate a UID, simulate a full tag loaded with data, similar to how hf mf eload <file> and hf mf sim works today.

And as we’re on the topic of Mifare. There’s been a long standing bug, where hf mf sim and hf mf sniff did not function properly. A couple of weeks back, myself and forum user piwi started investigating that. There were a couple of issues:

See below for more information about OTA measurements.

Earlier, I used a Rigol DS1074 oscilloscope to perform measurements. This was a bit of a hassle, since I wasn’t able to find a good triggering mechanism, nor was I able to perform a long enough recording to be able to capture the specific data exchange that I was looking for; in practice I just froze the DSO at random and hoped for the best. This way, I was still able to capture data with a bit of luck: However, I recently got a Saleae Logic Pro 8, and decided to use this for investigating both iclass and the mifare issues. It’s a small logic analyzer which also has analog capture capabilties, being able to double as an oscilloscope. I’ve really come to adore the little thing; since it streams captured data over USB 3, it can capture as much as your ram can hold, allowing for several seconds of captures at 50 MSPS. This makes it trivial to capture a communication sequence and investigate exactly what it is you’re interested in.

Here are some examples of traces captured with the Saleae. The upper one is simulation, the lower one is snoop of a regular tag. Both at the first tag response: 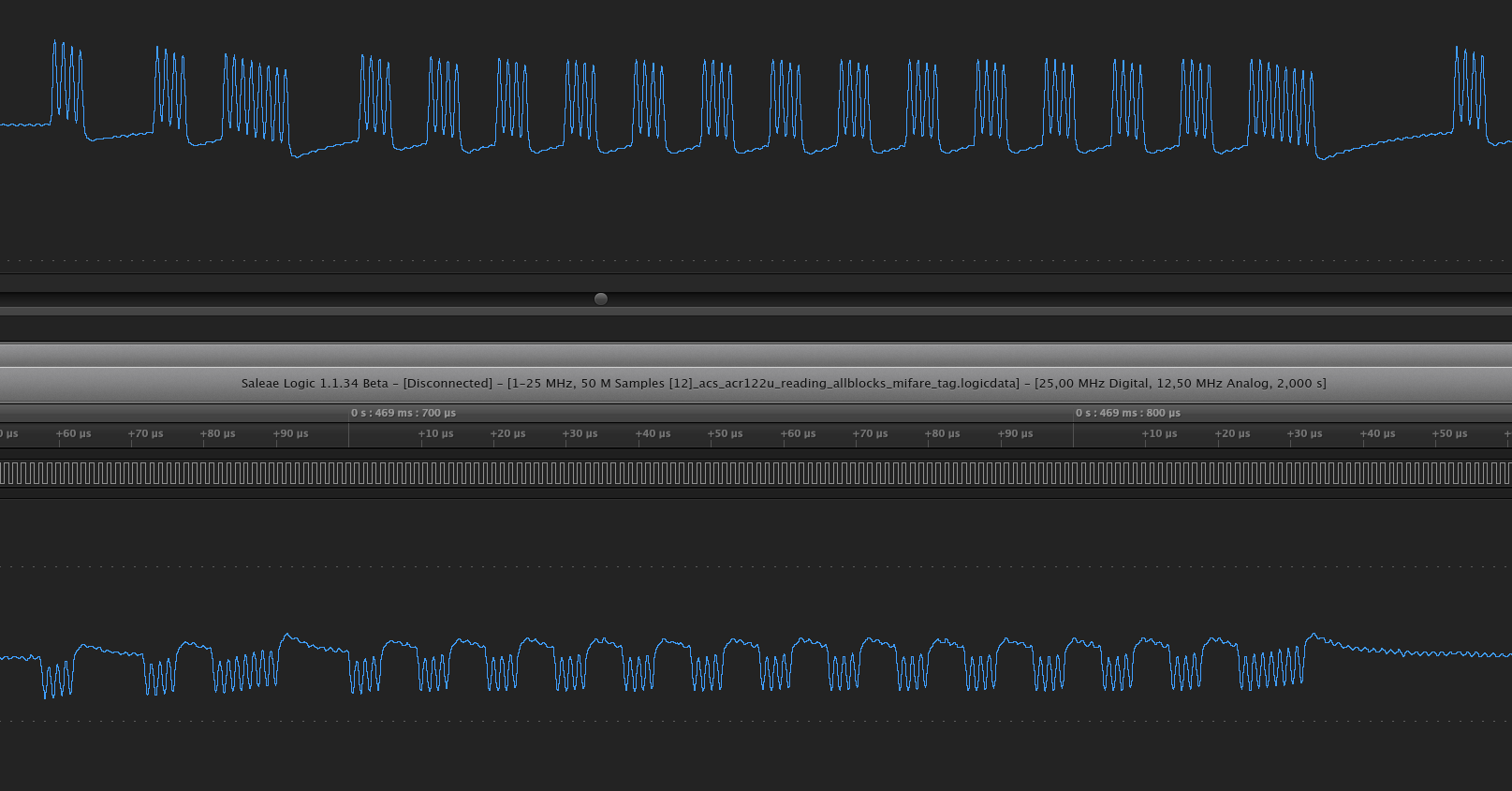 The extra bit sent during simulation is seen on the upper right side.

Below, the simulated tag fails to respond to a reader-command (the lower one is a proper tag):

Measuring OTA communications can be done in several ways.

An example of using a probe directly on the HF antenna is below. As can be seen, it clearly ‘exaggarates’ the local (tag) signal, showing them as very strong, while the reader commands are captured as very tiny notches in comparison. :

In order to perform the third type of reading, it’s easy to manufacture a simple HF antenna with a piece of wire. I used 3 loops of wire, wound rectangularly a bit smaller than a credit card, and connected to the DSO. The image below is made using a separate snoop-antenna: 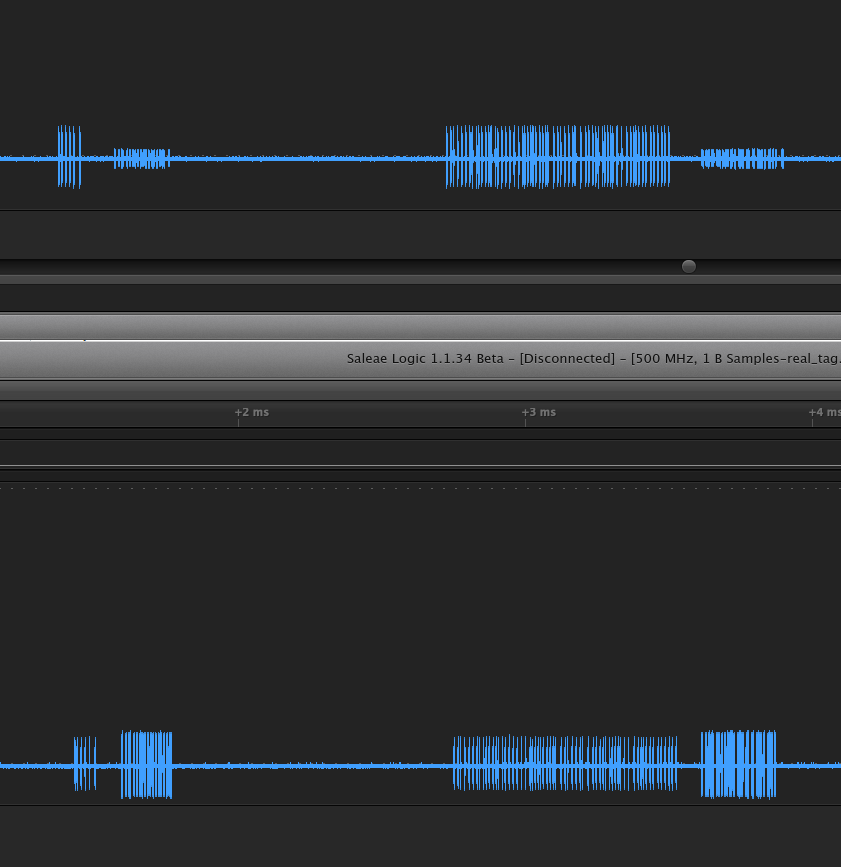 The Saleae device does some kind of interpolation, I believe that’s why the carrier frequency isn’t shown at all. However, that can be turned off for a more true representation of the signal OTA. Below are a couple of comparisons of the signal generated between an iclass reader and tag.

First, a zoomed out view where you can see the reader activating the 13.56MHz carrier field, and the ensuing communication. The peaks are reader modulations, the tag modulations cannot be seen here:

For comparison, the ‘Upsampled Pipeline’ version does not display the activation of the carrier:

The same capture, but with more zoom. The tag modulations can be seen as small notches in the carrier:

While in the ‘Upsampled Pipeline’ version, the tag modulation is still not visible:

Anyway, the device is awesome, I really recommend it for geeking around with signals and and electronics.

I then performed some more work on the LF-side of things. First off, support for longer sample recordings, both for lf read and lf snoop. It uses a configuration on the device side.

The user can set the decimation and bits per sample. After read/snoop, the data is fetched as usual with data samples, which is alerted about the bps and thus unpacks it to normal 8-bit samples on the client-side. In order to run standard demodulators on it, you can then do (client side) un-decimation:

This affects also how lf read and lf snoop works, since they now don’t take any parameters. You just configure via lf config, then call read/snoop.

Signal with 4 bits per sample:

Signal with 2 bits per sample:

The effect of this is that the pm3 can now perform sampling of LF signals for several seconds, which may be useful in some scenarios.

The graphing functions in pm3 hasn’t been touched in a long time. Currently, I’m reworking that a tad. It’s been nagging me that when testing different modulations or clocks, the graph is ‘destroyed’. Effectively, this has been the workflow:

I decided to use two buffers instead, and have a knob to set the parameters; and provide instant feedback.

Here’s how it looks right now: 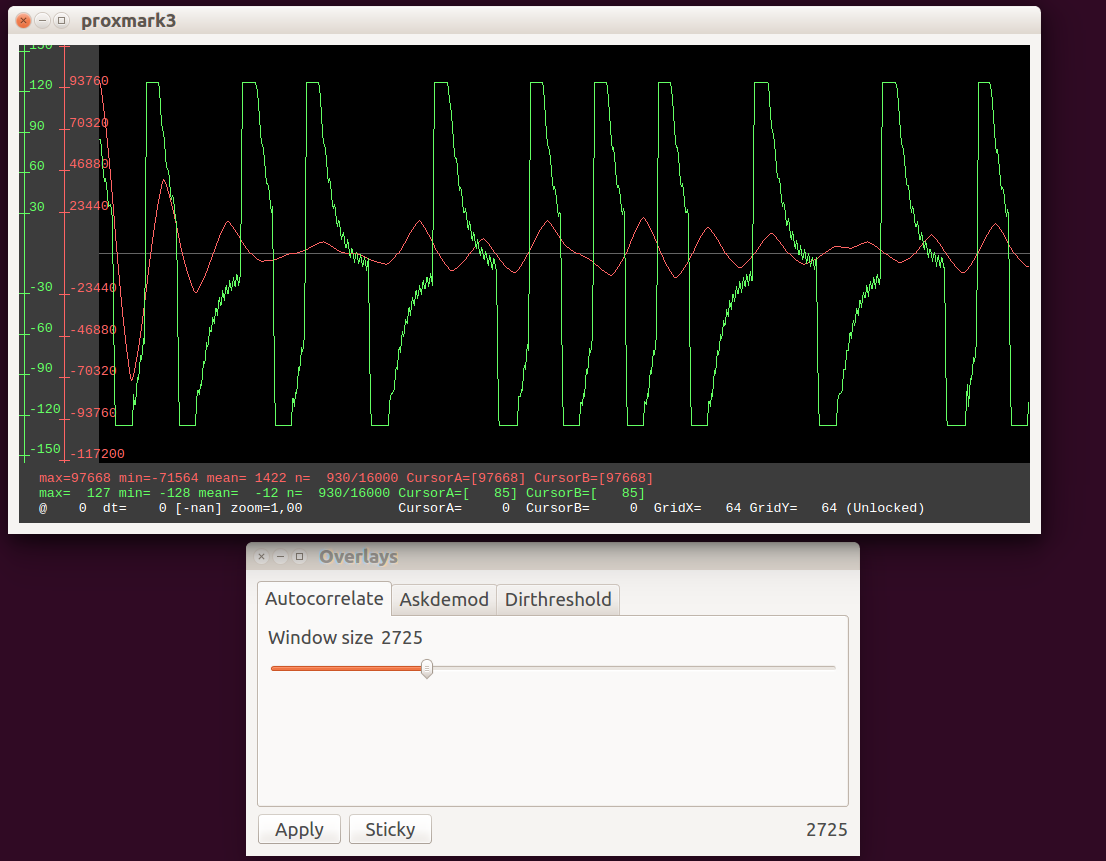 What you can’t see here, is that if you pull the slider to the left (increasing autocorrelatio ‘window’), the red graph updates in real time. The same thing with dirthreshold: 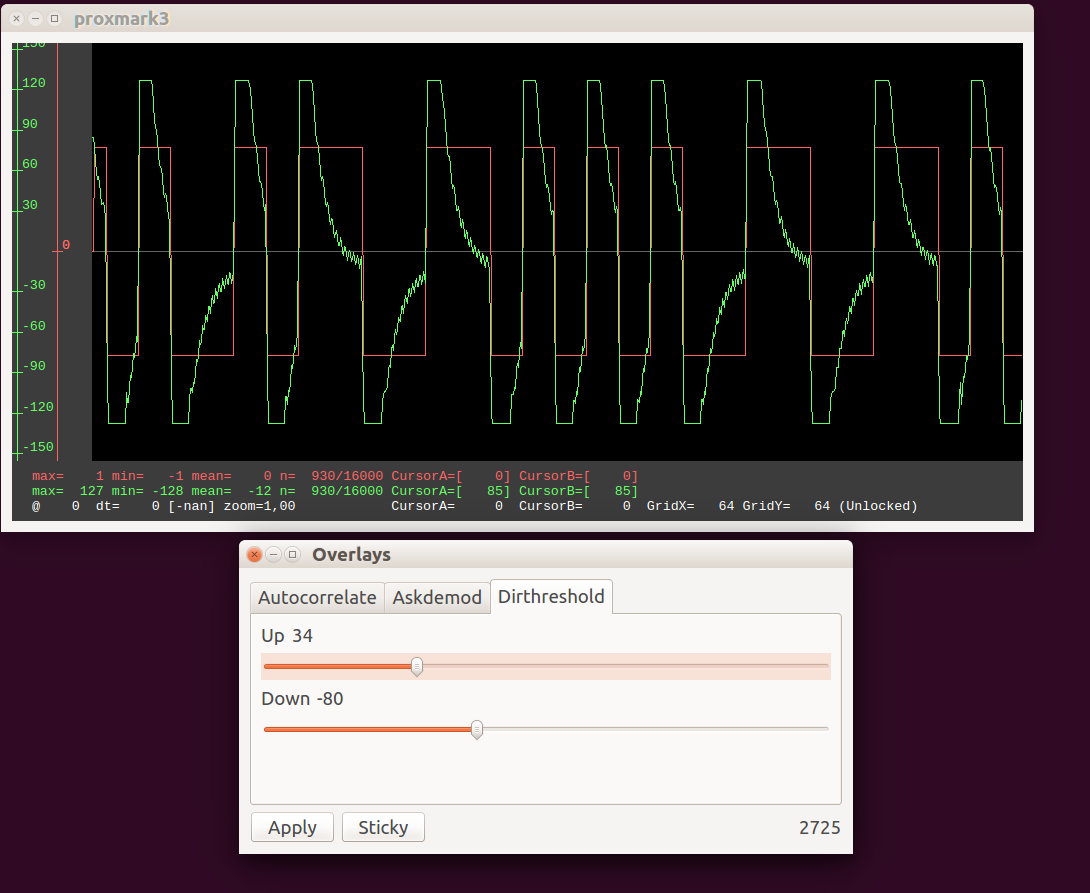 Once you’re happy with the settings, you can press apply, and the red signal is copied into the main signal buffer (graphbuffer): 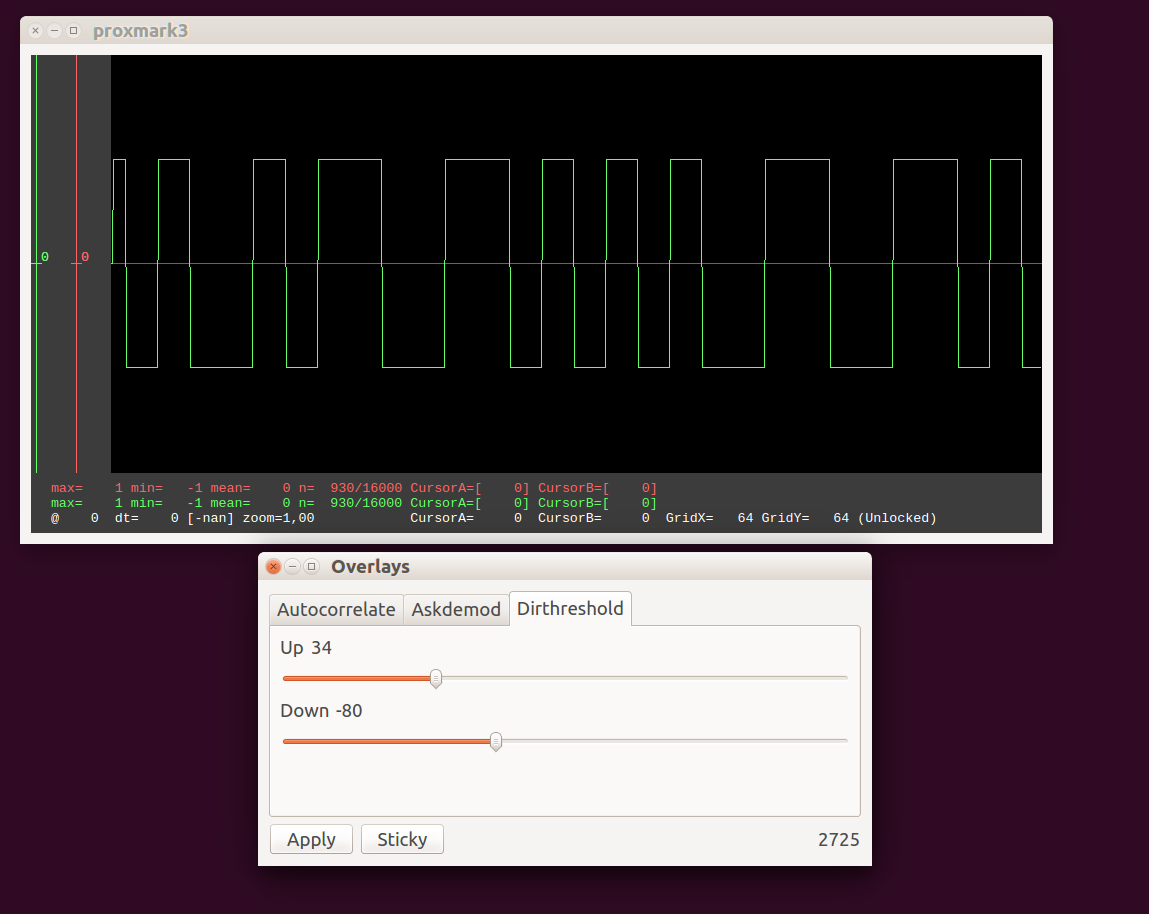 This last part is still in a separate branch in github, and not part of the master code yet. We’ll see where it goes.

There’s been a surge of PM3 development lately. Other members (marshmellow, iceman) have contributed major features in LF-area (new decoders for various types, new and improved demodulators) and scripting (identification/exploration of a common RFID-enabled toy), interaction with Mifare Desfire and Ultralight. It’s getting about time for a major version update soon.