I recently discovered a method to do generic proxying of Ethereum calls. Skip further down for nitty gritty details, I’ll start this off with some basics.

Sometimes, it’s convenient to build contract factories. For example, say you want to implement crowdsourcing, or auctions, or games, or DAOs. In those cases, instead of having one “Mother” auction which keeps track of active auctions (which, in turn keep track of bidders, offers and items), it makes sense to implement each auction/crowdfund/game/DAO as it’s own contract.

One problem is that these contracts are quite heavy; creating them may be very expensive and the creation of several may be limited by block gas limits. To counter this, the library-model can be used instead:

This has a bit of overhead;

By going a bit under the hood of Solidity, and using raw EVM assembly, it is possible to create a more transparent proxy mechanism, where the proxy contract does not actually have to explicitly know the method signatures of the target (A).

The trick do pull this off, is to use a default function in the proxy contract and just pass msg.data along to the target contract, within a callcode or delegatecall (this works for call works as well, but that’s a different usecase).

So how would you use this? Simple:

The overhead from the example above is that it adds ~200 in gas for each invocation, which is really miniscule. A second problem is that while method invocation is simple and truly generic, return values from those calls are not generic. It is simply not possible, from within our default function, with only access to the msg.data, to know how much data the target contract intends to return.

So the logic concerning that is not truly generic; it’s either hardcoded, or can be changed between method invocations. Note, though; if we expect a large return value, the gas cost is a bit higher, but if a target contract does not use the full space (or any at all, for that matter) - there are no errors; it still works. So hardcoding the largest expected return value makes for a somewhat generic proxy.

Thirdly, one problem which is specific to callcode and delegatecall, but not call, is that A and B needs to have identical data members. In the example above, the address add resides at storage slot 0. It is fetched by sload(0). This means that A, which is the instantiated full contract, also needs a address at storage slot 0. And, naturally, all data members which A operates on needs to exist at identical storage slots in B.

A nice thing about this is that it’s based on the default function, which is only used if no other method signature matches. This means that if you add another method signature, say pointProxyAtAnotherContract(address), you can reprogram the proxy, instead of setting it in the constructor. This type of usage could be useful e.g for updating contracts, where the base contract is in fact a proxy, and whenever the library instance is updated, any new method signatures added to the new version will then be available in the original base contract.

If you want to experiment with this, you can use this gist, which can be imported directly into the online solidity compiler like this: 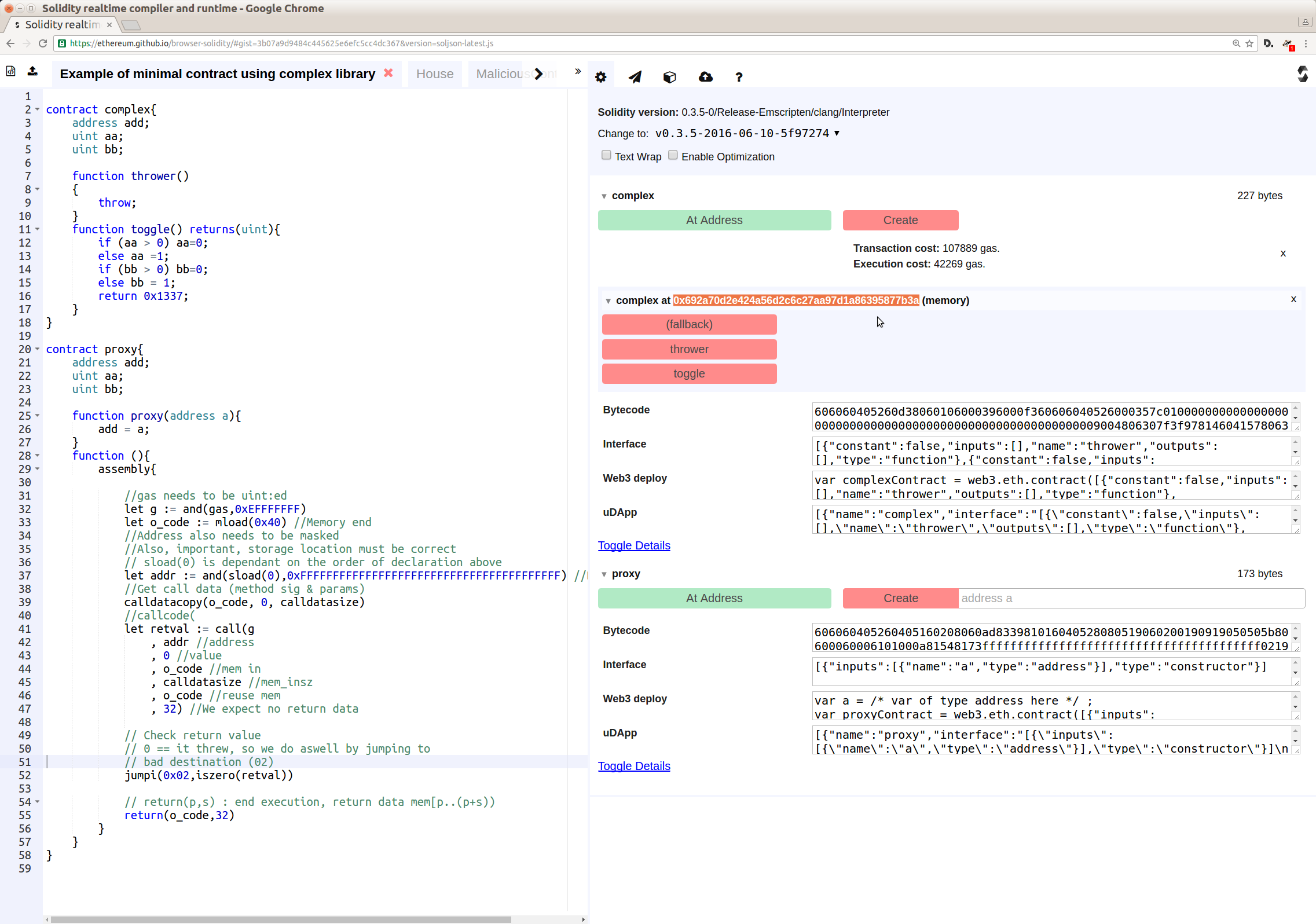 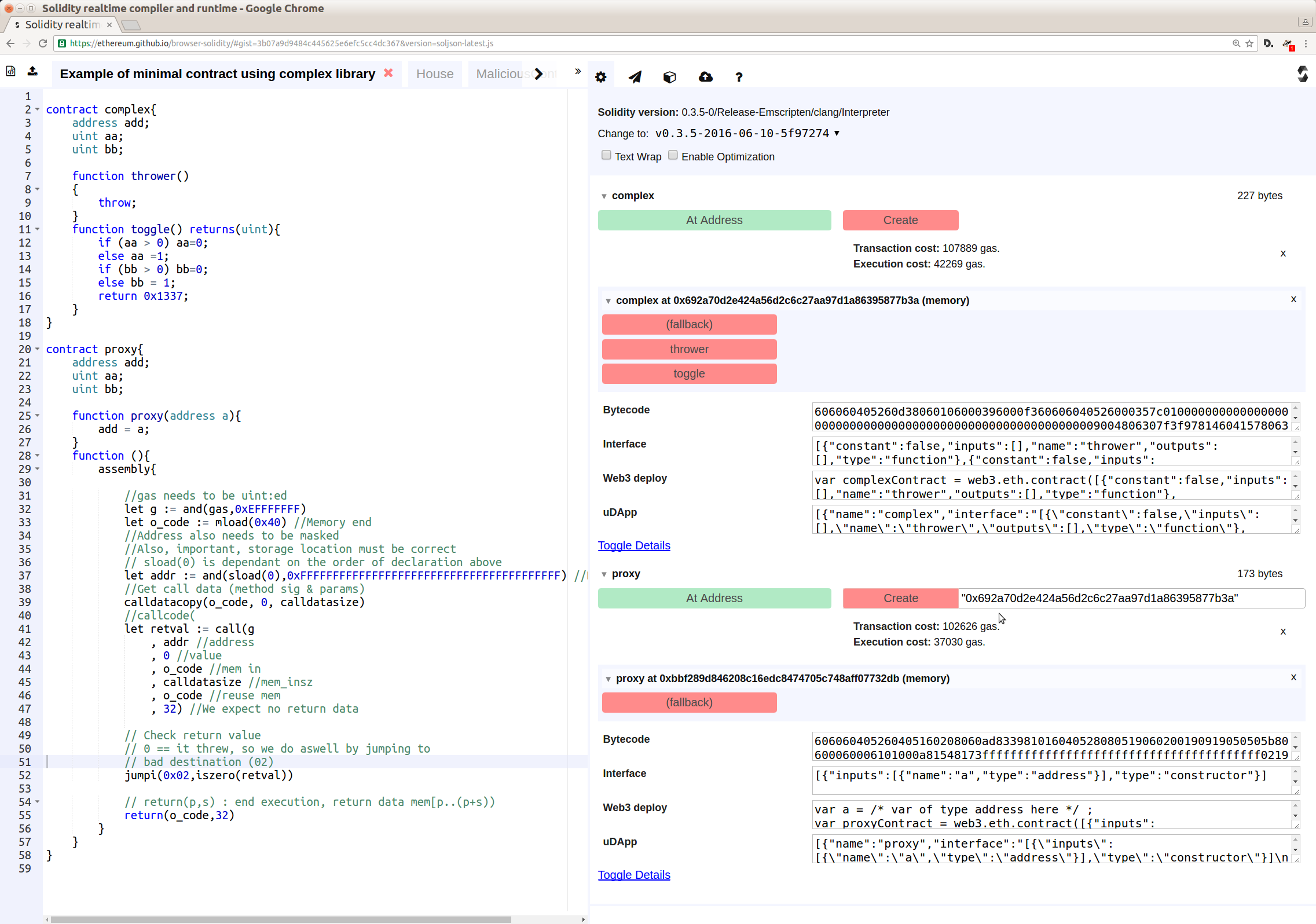 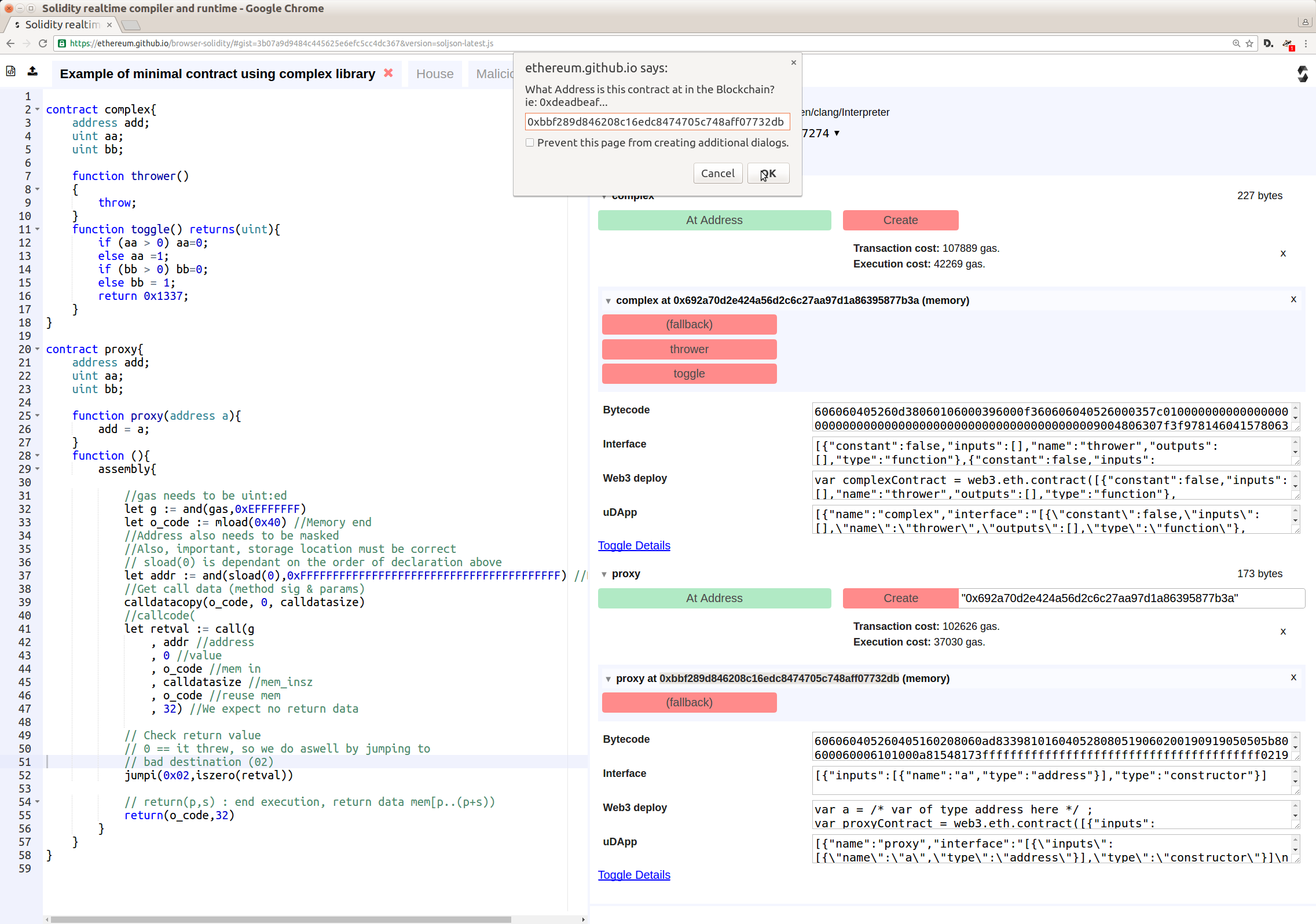 And you can experiment with the contract. Test for example to change call to callcode or delegatecall (but for the latter, you need to remove the value parameter in the call). 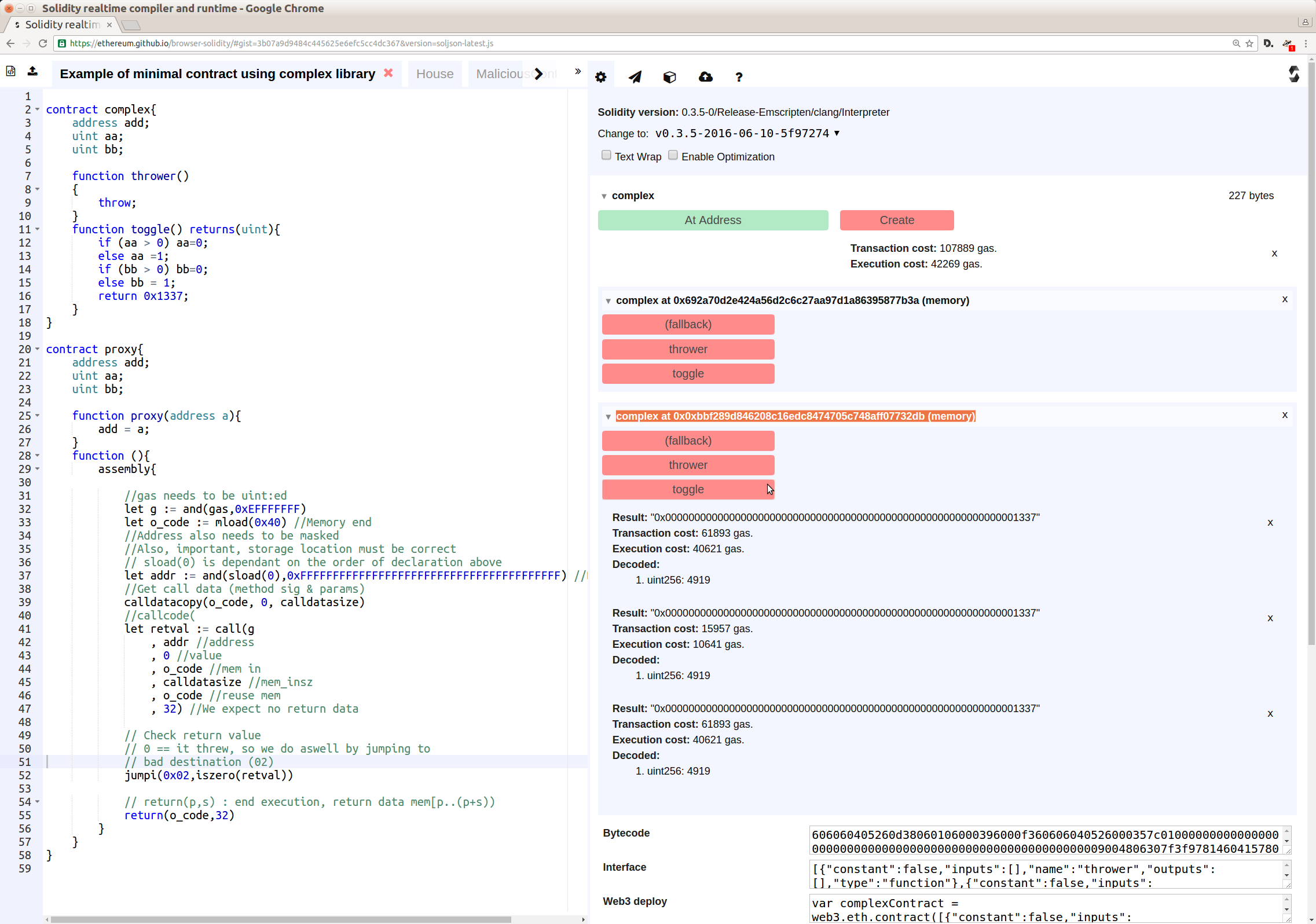 Invoking the toggle method, which (if executed correctly) costs more gas every other time, shows the negligable overhead using this proxy. No proxy:

If you want to learn more about the nitty-gritty of Solidity, and the EVM, I can recommend checking out Andreas Olofsson’s solidity workshop here, specifically this. Also, the official docs.

After writing this post, I was made aware that this trick has already been documented by Ethereum developer Nick Johnson, for use in upgradeable contracts. So credit goes to him for finding it! The usecase that led me to it is a different one, though; instantiating cheap contracts with heavy libraries (using callcode/delegatecall), whereas Nick describes the usecase of updateable contracts (call) more in depth.