The shades of NFT

NFTs, the good, bad and the ugly

I’ve been sceptical about NFTs, that there are both good and bad things about it.

My first interaction with an NFT was back in 2016, during Devcon2, when Piper Merriam explained to me this “hack on the ERC20 standard”, and used “non-fungible tokens” to represent presence at Devcon2. He set up a table in the back of the conference hall, and anyone could walk up, present an address, and be given an NFT (yes, gas costs were lower back then). His idea for what to use it for at the time, were somewhat vague, if I recall correctly; he thought that maybe it could be useful in the future. The repository can be found here.

Crypto-historians may correct me if I’m wrong, but I believe that Piper Merriam invented the first NFT concept at that point.

EDIT: this was indeed wrong, as have been pointed out to me on Twitter. The first NFT was Etheria, presented in 2015 at Devcon1. In Etheria, you could own a tile in a virtual world. The tiles were non-fungible and transferrable. It was even early enough to predate ERC20 (!) and although ‘semantically’ an NFT, it does not conform to the technical NFT standard in use today. Hat-tip to Etheria, nevertheless!

NFTs: the bright side

NFTs can be a good way for artists and creators to earn money in a digital world, with out relying on third party mega-platforms eating their cake. In this scenario, NFTs can be on a spectrum. On one side of the spectrum, the NFTs themselves are lacking intrinsic value, other than honorific - they are tokens which represent that a certain person has sponsored a creator. There exist many pre-blockchain analogies for tokens-representing-sponsorship; such as sponsoring plots of rainforest or old Swedish forest - gammelskog. On the other end of the spectrum, the NFT represents some type of ownership of a (digital) goods, and/or may grant access to use the digital good in virtual worlds or as downloadable content.

NFTs can even represent the claim on a pure physical asset, such as a pair of socks. Naturally, such ownership is not intrinsically decentralized, they depend on the product provider to remain active in order to redeem the product. EDIT: Ethersocks are ERC20, not technically NFTs. Within a controlled environment, and NFT could represent e.g. the ownership of a certain parking spot or the or a certain locker at the gym.

NFTs: the gray side

What has rendered me sceptical, is that NFTs are often used to promote artificial scarcity. Invent a “scarce” resource, where the scarcity lies solely in the fact that “only 500 cyber-chipmunks will every be minted!”. Efforts such as those are, IMO, hype-based money-games. A hype created by millionares playing with excess money in the hope of winning a bit more.

I think this snippet from Bloomberg sums it up pretty well, in many cases:

The essential transaction in an NFT is:

Note though: I don’t mind. If people want to play these games, it’s not a chip off my shoulder.

Overall, my take is mostly that I don’t quite understand the hype about it. It will probably pan out, and settle into something better. All new concepts have a period of adolescence before society understands how to use it and where it fits.

NFTs: the dark side

However, a darker side of NFTs can be found here: https://decrypt.co/60070/an-original-banksy-has-been-burned-and-turned-into-an-nft

An original artwork by iconic British street artist Banksy, named “Morons,” has been physically burned and transformed into a digital representation—known as an NFT—by a group of collectors and investors. This digitized art-form, the group argues, is the future of the art industry.

The article also compares it with another event:

In the real art world, in 2018, a similar stunt was pulled by no other than Banksy himself. His iconic print “Girl with a Balloon” was shredded seconds after it went under the hammer for $1.4 million, in an event that took the art world by storm.

Now, let’s compare the two, which in my mind are on complete opposite sides of the spectrum.

Banksy doesn’t care about the art Industry. His point of view is that people who pay huge sums of money for his (or others) work are, basically, morons: 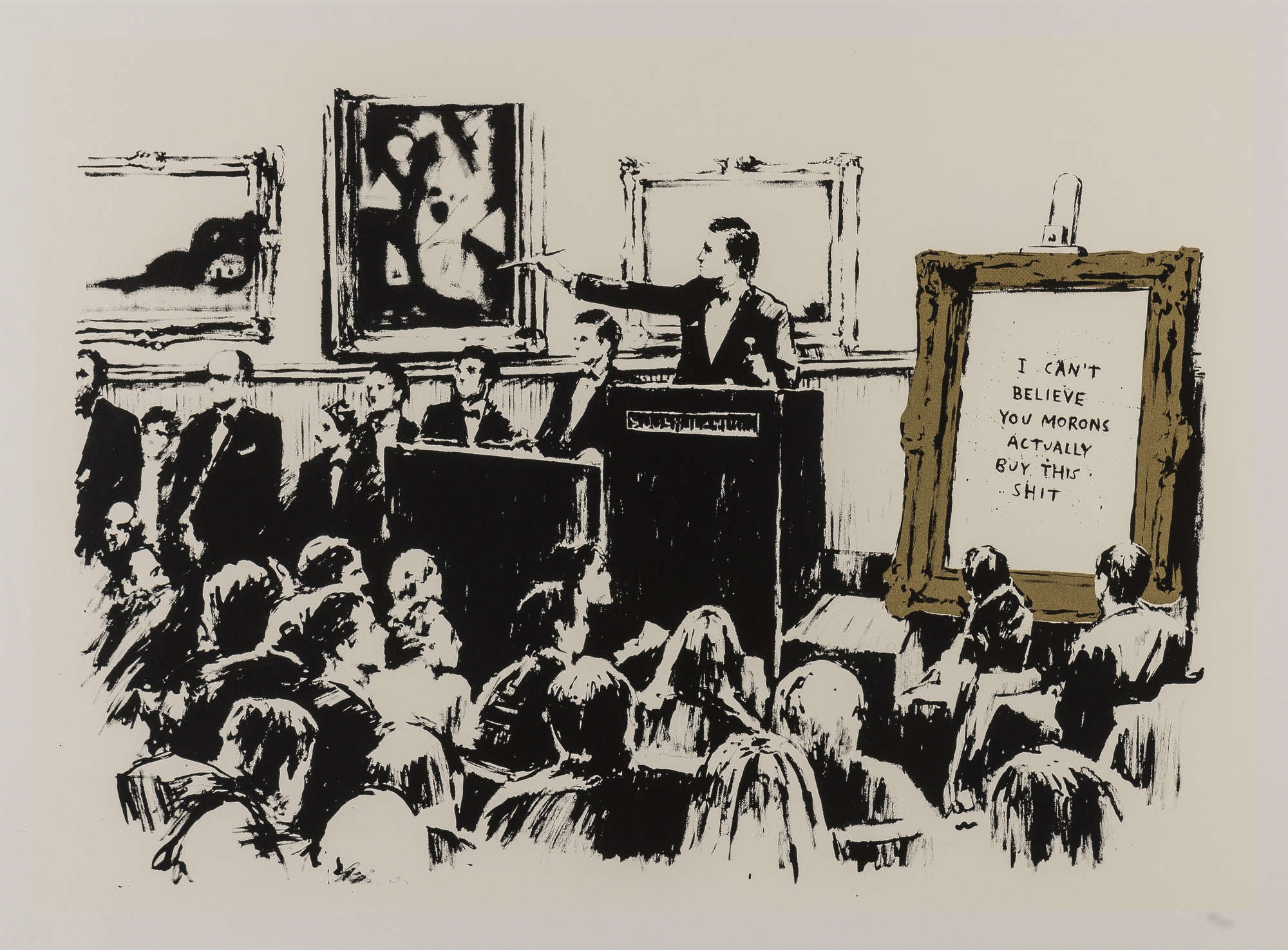 With that background, the shredding of his painting at the moment it’s sold for $1.4M, is a reaction to the hype. It’s a mockery of the high price that was paid. It’s an action that, to me, says “You are morons”. It’s a protest against art being used for speculation.

Back to the NFT burn.

Here, the NFT representation of the physical pieces of art is seen as a digital owner certificate, just like the socks. The big difference is that socks are not unique, unlike the artwork.

The problem with this view is that since there exists both a digital certificate, and the actual physical painting, there are two conflicting interpretations of ownership: the digital versus the physical. Because what if someone sells owns the NFT, but the artwork is sold to a non-NFT-aware art collector separately? Obviously nothing, except that one may now question whether that NFT really represents …anything at all. And here’s the idea: burn the painting. And by doing so, the resoning goes, the full value of said painting must be transferred into the NFT. Because, the reasoning goes, something may cease to exist, but the value remains. Because reasons.

As I see it, when we remove the actual physical work of art, all that remains is the speculation. This is exactly the opposite of Banksy’s stunt. The core idea is “Hey, you know that one can speculate on art, right? Well, let’s just remove the pesky artwork from the dealings, and just speculate as if the artwork still existed”.

Imagine the following scenario: I sell you a 1945 Rolls Royce for $1MM, residing in a storage unit. In exchange for $1MM, I give you the deed for the car. The deed represents the ownership of it, and ensures that you and only you can collect the car from the storage unit. Alas, the storage unit and everything inside burns down! Fortunately, you still have the deed, representing your ownership of a car that no longer exists. Some time later, you sell the deed for $1.5MM to another RR enthusiast. Both of you are happy that the car no longer exists, so you neither have to pay montlhy cost for the storage unit nor do any maintenance of the car!

It’s absurd, yet it’s exactly what happened with the Banksy painting.

The representation of ownership of A THING is not THE THING.

Although “creative destruction of art is not new… it is always upsetting and shocking to see a piece being destroyed,” said Gabrielle Du Plooy, founder of Zebra One Gallery. “And in this instance, the intention seems more cynical.”

Unfortunately, this might not have been a one-off event. Similar events might well happen again, most recently it was suggested to burn a book, symbolism notwithstanding. EDIT: Since the publication of this post, the page is no longer publically available. The proposal was to issue NFTs for every page of the book, upload it on chain, and then burn the book – although in fairness, the burning step was marked as optional.

This particular type of NFT is cancer - the parisitic growth (value-speculation) has destroyed the healthy tissue (item of value). The world has already lost one piece of art, and the world outside the crypto sphere is justifiably abhorred hearing about what is happening in our little bubble.

Please don’t buy into (literally or figuratively) this type of destructive game.